You are here: Home / 2014 / February / Glycix, the biodegradable thermoset polymer that will conquer the world

Researchers of the University of Amsterdam (UvA) have made a new step in the development of glycix, the only thermoset plastic that is both biobased and biodegradable. All inflexible plastic items used in homes and buildings can be made from this polymer: computer and telephone casings, insulation foam, trays, tables, lamps…. This is a major step forward in the battle against the mounting pile of plastic waste and the plastic soup in the oceans. But take care not to use this material outside: after some time, the polymer dissolves in water….

A once in a lifetime event
Researchers Gadi Rothenberg and Albert Alberts discovered glycix by chance, according to their story. They were looking for a biofuel and developed a bioplastic. ‘A once in a lifetime event.’ Now they developed glycix one step further. In earlier releases on this subject, they were rather secretive on their product, because there were patents pending. Now they have made public that the basic ingredients of their polymer are glycerol and citric acid, two substances in abundant supply that can be produced from biomass. Their plastic now appears to be a polyester. We do not have further details yet, as there are still more patents pending. Last week’s press moment was the presentation of a table made from glycix to the board of the University of Amsterdam.

‘Glycix is 100% biodegradable,’ says prof. Rothenberg. ‘With water it breaks down into its monomers, i.e. glycerol and citric acid, two compounds which are completely natural and will be absorbed in the natural cycle. The decomposition rate depends on the degree to which the plastic has been hardened. Decomposition time varies from several weeks to a year, depending on the production method. Therefore, the plastic cannot be used in equipment used outside; but in principle, it is a good material for any product used inside.’ 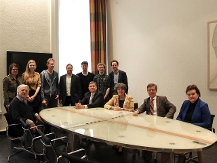 Glycix table presented to the board of the University of Amsterdam

Industry is very much interested
Processing glycix is low-tech. Injection moulding is easy. The substance easily adheres to other materials and can therefore be used in combination with stainless steel, glass etc. Furniture made from glycix will need extra protection; therefore, the table produced for UvA for instance, has been covered with a glass plate, in order to prevent that the cup of coffee spilt will decompose the table. For that reason, after the development of the plastic itself, there will be a long trajectory of processing development, and of the design of new goods. In this area, UvA cooperates with Amsterdam University of Applied Sciences. Further development will take years, patent procedures by themselves last several years.

So far, all biodegradable plastics were thermoplastic polymers. Therefore, thermoset plastics would by definition incur a waste problem, whether they would be discarded or end up in a landfill. ‘Our plastics will disappear into nature all by themselves, every bit of them will be decomposed into vegetal materials,’ says Rothenberg. ‘Our plastic is going to change the world. Industry is very interested already.’ And would that be chemical industry or consumer goods manufacturers? ‘Let us just say that industry is very interested.’

Prof. Gadi Rothenberg and Dr Albert Alberts are chemists based at the UvA’s Van ‘t Hoff Institute for Molecular Sciences (HIMS). This research is being carried out as part of the Sustainable Chemistry research priority area. The AUAS/HvA is working on the application of bioplastic through its CleanTech research programme, which focuses on sustainable technologies.