‘Socialise the risks and privatise the gains’ has been the reigning economic principle in the financial world in the past few years. Now such a mechanism also appears to be functioning in the much less murky innovation process. And here too, at the expense of the tax payer. And in the end, at the expense of the innovation process itself. Mariana Mazzucato wrote a book about this, revealing and even disconcerting, ‘The Entrepreneurial State’. Greed appears to be all-pervasive.

The most innovative state in the world is on its retreat
The United States was the most innovative state in the world during the past fifty years. Mariana Mazzucato, an economics professor, RM Philips Chair in Science and Technology Policy at the University of Sussex, starts out from this fact and poses questions like: how did they do that? And will that mechanism stay intact? She answers the first question, but not the second one. But she does formulate some prerequisites for the continuation of this innovation mechanism. According to me, however, this mechanism will stop functioning, in view of the mentality in companies large and small, that does not differ from that in the major banks.

Contrary to tales told to us citizens, the business community is not the great innovator. The state (here the American state) is the only body willing to come up with the huge sums required for high-risk projects, and capable to do so. That is Mazzucato’s answer to the first question. Companies nor venture capitalists (VC), who always boast about their decisive role in the innovation process, simply want to carry the burden of risk in basic research. Not do they carry that burden in the subsequent phases of the innovation process, but once they have entered the process almost without risk, they do reap the revenues – without ploughing back part of those revenues in the government’s innovation system. That is why the government’s innovation machine will run out of fuel sooner or later. Add to this insight the knowledge that most major companies, having grown big because of government support to the innovation process, hardly pay taxes, and we can predict that some time, this process will come to a halt. At that moment the role of world leader will fall upon China’s shoulders, that is at present willing to go all the way, just like the Americans fifty years ago: from basic research, through pilots and demos, and even the development of markets (even foreign ones). And that has the funds to do so. 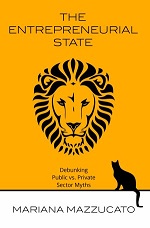 Who will take the lead?
Americans might have to stop and wonder why China advances so much in science and technology. They themselves did such a wonderful job fifty years ago in science and technology, amassing a body of knowledge that still serves the American business community. For instance, all the very diverse technologies that added up to Apple’s astonishing worldwide success, have been initiated by the American state. Internet, developed within the Department of Defence’s DARPA program, is just one telling example. But it holds true for at least ten other basic technologies that are hidden in these wonderful consumer’s items. Says Mariana Mazzucato, who elaborates the example of Apple in a special chapter. But no gracefulness or acknowledgement in the business community. Quite the same as in the banks that were saved from bankruptcy by billions of taxpayer’s money. Even on the contrary, this sort of successful firms tries, once successful, to diminish the role of the government to that of facilitator, forgetting that that very government laid the cornerstones of their success. And that it will have to generate enough money to compensate for the inevitable losses.

Will the green economy slow down?
Serious consequences of this state of affairs begin to surface. The American government, for instance, cannot generate enough pressure on research to produce a crushing ‘knowledge fist’ in the new green economy (MM speaks of cleantech, meaning primarily sustainable energy technologies). Not to mention the subsequent phases of green economy development in the form of pilots and demos. Here again, others may take the initiative. Maybe Europe? Possibly. The EU made a good attempt in its recently started BII (Biobased Industry Initiative) program in a public-private partnership jointly funded by the EU and the business sector. But I feel that China and maybe Japan are in a better position to take the lead. Read this book, it will liberate you from outdated conceptions of the relation between government and the corporate community in the United States; but it might kindle rather pessimistic thoughts about the future.

🌱 Sustainable operations are both a current and future crisis. That’s precisely why the conversation has shifted away from “why” #sustainability is important toward “how” businesses can make it a reality: imsap.co/601135wcB #supplychain pic.twitter.com/eAyC5Trngt

@animaljusticeAU @AustralianLabor @tanya_plibersek 🛑 #Australia DON’T BUY THE GOVERNMENT’S SPIN Is this any way to treat a national icon? The multibillion💰commercial #KANGAROO industry and government is launching its own campaign to try to sell its #sustainability & welfare credentials. THEY ARE LYING! abc.net.au/news/2022-05-0…