You are here: Home / 2013 / October / Towards a smaller scale in the biobased economy: the interim results

On August 18, we started a discussion on the development towards a smaller scale in the biobased economy. We continued this discussion in a LinkedIn group connected to www.biobasedeconomy.nl. What was the outcome of this discussion? 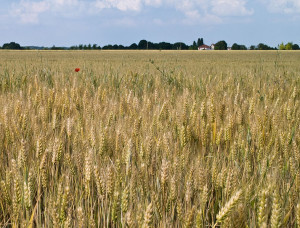 In the biobased economy, agriculture will supply resources to industry – a much less concentrated stream than fossil fuels.

The reason why we feel that the biobased economy will be smaller in scale than the present, rests upon two assumptions. The first one is that biobased industries will obtain their resources from agriculture. These resources cannot be delivered in the same large-scale and concentrated way as crude oil (much land required); in addition to that, the biobased economy needs to organise a return stream of minerals to the land, which will restrict the scale of operations. The second assumption is that a chemical industry based upon fermentation will be smaller in scale than the petrochemical industry: less economies of scale, less need to cluster.

Bollocks!
The development towards a small scale is fake, says Arnold van der Post. The world continues to develop into a larger scale, because of overpopulation if not for other reasons. In order to compete with incumbent industries, biobased industries will have to grow into a comparable scale. Moreover, incumbent companies are in a better position to finance their ventures: they acquire the majority of subsidies, and banks too, favour them.

Nonsense, according to Hein Aberson. A development towards a smaller scale will lead to better self-sufficiency, and that is precisely what we need now. Look at Bavaria, the most prosperous German Land. It has grown big by procuring as much as possible within its own borders. Huub Dormans agrees completely: the local component of the economy is becoming more important. Many horticulturists nowadays sell part of their produce within their regions. Better in quality, lower in price. That is what we need: better self-sufficiency, less intermediate parties in the economy. What is the relation to the biobased economy, Arnold van der Post wonders. 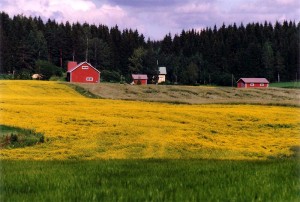 A small-scale biobased economy might be successful in Europe, precisely because agriculture has a relatively small scale here (rapeseed field in Finland).

Towards less control in society
For some, the development towards a smaller scale is primarily linked to a change in the social and political system. A smaller scale lends itself less towards control and power exertion by big companies and governments, says BB Klaversteijn. A smaller scale therefore will give rise to unexpected opportunities. The small scale is a new paradigm. It will allow us to set aside the old philosophies, for example the necessity to recover investments within three years. The small scale is about something radically new, an approach inter alia that will have to grow in hiding before it will make a breakthrough, precisely because of that. And Hein Aberson, too, is of the opinion that we now have the opportunity to discuss the need for economic growth.

According to Monique Wekking, a small-scale biobased economy could precisely be successful in Europe because agriculture is much more small-scale here than in the US, for example. But Peter de Laat and Matthijs Ruitenbeek feel that the small scale will have to measure its strength with the large scale system at some point (assisted by a trend towards the smaller scale in technology, we added). The biobased system has the disadvantage that it is still far away from its optimum, unlike petrochemical industry. Therefore, the breakthrough of the small scale will take a while. Even though the large scale system increasingly copes with system costs (another contribution of ours to the discussion).

The farmer’s quest for independence
Farmers will always want to be independent, BB Klaversteijn says. They do not want to be encapsulated by large-scale systems, and therefore will be a permanent force towards a smaller scale in the biobased economy. He sees many opportunities for biochemical processing at farms, assisted by modern technology with remote control. And he sees a bright future for mobile processing of the yield by mobile biochemical companies. There will be need for them, he says, for if a process would be successful in a certain region, feedstock prices would rise immediately. The owner of the mobile processing unit then has a competitive edge, he can move on to a region where prices are still low.

We conclude that there are many viewpoints in the discussion on the smaller scale. We know that new commissions try to develop a view on this issue, and we will keep you informed.