You are here: Home / 2013 / August / Towards a smaller scale in the biobased economy. But why, and to what extent?

Many researchers claim that the biobased economy will be organised at a smaller scale than the present economy. On this website we held the same opinion. Chemical plants would become smaller, and located more closely to their feedstock supplier (agriculture). Energy supply would decentralise even more radically: people might produce their energy anywhere from solar and wind power. But upon closer inspection, the tendency towards a smaller scale becomes somewhat elusive. 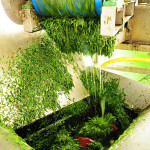 In the Grassa project, grass is refined and separated into components; a wet fraction containing minerals is returned to the land.

Decentralisation in agriculture
According to some researchers, we will witness a radical decentralisation. For instance, Johan Sanders (professor at Wageningen UR) argues that conservation of soil quality will be the prerequisite for the biobased economy. In order to prevent unnecessary water and nutrient transports, farmers will pre-treat the harvest to produce storable intermediate products; they will return to the land the wet mineral fraction produced in that process. This would be economical up to a radius of 2 km around the farm. A radically smaller scale of the basis of the economy.

But surely, the production of refrigerators and motor cars will not be decentralised to such an extent even in the biobased economy; even if 3D printing (another technology potentially leading to a radical decentralisation) might be so successful that in the future we could produce many appliances at home? And we might presume that the cheap solar cells or wind turbines from which we would locally produce electricity, would be produced in large factories. So, to what extent will the need for preservation of soil quality structure agriculture, and to what extent will this agricultural structure be decisive for the biobased economy?

Decentralisation in the chemical industry
‘Fermentation can very well be done at a small scale, as people now who brew their beer themselves,’ we heard from Luuk van der Wielen (professor at Delft Technical University) many years ago. We thought that expression to be so apt that we included it as a perfect quote on this website. And fermentation will be decisive for structure in the biobased economy. So we will move towards a smaller scale. But what is the underlying reason for this effect?

An article by Jean-Paul Lange, an employee of Shell in Amsterdam, might shed light on this matter. It is unobtrusively called ‘Fuels and chemicals manufacturing, guidelines for understanding and minimizing the production costs’, and appeared in CatTech Vol.5, no.2, 2001, p.82-95. Among other things, Lange proves statistically that chemical plants grow bigger in proportion of their heat effect (i.e. if the chemical process produces or requires much heat). Most petrochemical reactions take place at a high temperature and produce or require much heat; fermentation takes place at a low temperature, and has a small heat effect. Hence, ‘Lange’s law’ would cause chemical plants to become smaller. Moreover, in the petrochemical era, factories clustered in order to allow heat transfer from processes producing much heat to processes demanding much heat. The installations, being big by themselves, clustered to very large petrochemical complexes. All that will change in the biobased economy.

A modest decentralisation motor
This is quite a modest decentralisation motor, as compared to the mechanism on the basis of minerals reuse. It is even more modest as the correlation between heat effect and investment cost does not hold for very small installations – the very range that would interest us most. And Lange’s article is the only scientific article known to us on this subject – does that amount to sufficient ‘scientific proof’ of this relationship? So, what effect will this relationship have in actual practice? Moreover, the relationship only holds for the chemical industry and does not apply to consumer goods production – the aforementioned refrigerators and motor cars. Many other factors figure there. Often, factories of household appliances are located far from their natural resources. Low wages are important factors. But there are good reasons to locate such factories in the vicinity of the customers – in particular in the case of consumer goods. Quality control will then be easier. And producers may be more flexible in their response to market changes, because they will have shorter lead times; effects that increasingly outweigh a reduction of the last Euro in production costs in a low wage country. This discussion boils down to the question: will decentralisation in chemical industry have a large effect on industry as a whole? 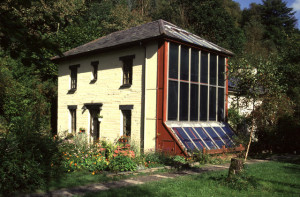 Solar panels could contribute greatly to near autarky in many regions.

A largely autarkic economy
But a new decentralisation motor might ensue from a combination of demand side and supply side factors. Some factories adjacent to feedstock suppliers, others in the vicinity of the final consumer – what of these two places would coincide? That might be the case in the biobased economy. At least, if agricultural yields keep rising. Then we could get a high-yield agriculture that could feed the population and produce feedstock for industry on top of that, even in densely populated countries. Such an agriculture, combined with a local energy supply, would produce a largely autarkic and possibly even circular economy. Utopian? If the price of solar cells will keep plummeting, and agricultural yields keep rising, Europe of the 27 will have no problem in supplying its own demand for energy and industrial renewable feedstock within some decades. Simple calculations on solar incidence and agricultural yields will do as a proof of that contention. And if Europe could do it, why could not Bavaria, or Flanders, or the Northern Dutch provinces? The European scale might be a little too large to justify talking about a development towards a smaller scale, but that of the Northern Dutch provinces….

A smaller transport volume
Our reflections boil down to the question: to what extent will the tendency towards a smaller scale manifest itself? The answer to that question would, we presume, be of the utmost interest to economists, in particular transport economists. For each decrease in scale will result in smaller transport volumes: goods will be transported along smaller distances. Long-distance transport will then predominantly concern valuable items: special construction materials and textiles; mineral resources and intermediate products; spices and (semi)precious stones. More or less like in antiquity. Mass transport of fuels would gradually be phased out. The value of goods transported will increase, their volume will decrease. The question to what extent scale will decrease, is of major importance to logistical companies – and to governments that still tend to regard construction of new physical infrastructure to be beneficial to economic growth.

In this way, the biobased economy relates to many other economic themes. As to the tendency towards lean production. Or to the ideas about a physical internet. Themes that could result in a smaller scale of the economy, and in transport volume reduction as well. But which do not lead to any quantitative conclusions either. So we return to the questions raised in the title of this column: the biobased economy might head towards a smaller scale. But why, and to what extent?