You are here: Home / 2013 / October / Rapeseed as a frontrunner in agricultural innovation

In the Northern provinces of the Netherlands, Ron (son) and Hein (father) Aberson have been pioneering with rapeseed for ten years; they try to establish an autarkic cooperation. SOS, Solar Oil Systems, is the name of the company, based in Boijl. ‘Just sow the seed intelligently, and one will harvest protein rich fodder and fuel.’ And one will keep intact the soil’s top layer. The Abersons drive cars that run on rapeseed oil of their own, and they do not understand that Europe calls their Pure Plant Oil a first generation biofuel. 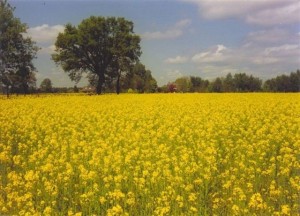 Grass and rapeseed
On this site, we have dwelt on grass and the opportunities of mobile grass refinery. A year ago, we attended the first tests in Appelscha, and we were at the closing meeting of the biorefinery tender, for which the Frisian company of Grassa got an encouragement subsidy some years ago. Close to Appelscha at the Frisian border is Boijl, that hosts another fine example of sustainable development: production and processing of rapeseed in a cooperative of fifty farmers. The construction of a joint oil mill is well underway (to be completed in November) for the production of Pure Plant Oil (PPO) for their own tractors, and of fodder for the members of the cooperative now being established.

Rapeseed, a fine product
We could not agree more. Four kilos of seed on a hectare will yield Ron and Hein Aberson a harvest of rapeseed of more than a thousand fold. One third of that yield consists of oil, to be used as a tractor fuel and as an edible oil. Two thirds consist of rapemeal, to be used as a soy substitute in fodder, that will return to the land as manure, together with the straw. Hein: ‘Rapeseed is a deep rooted crop, that adds a significant amount of organic matter to the soil in each cropping cycle.’ On the same hectare, those four kilos of seed will also produce 8 000 kilos of roots (humus) that will boost production in the next cycle, and 4 500 kilos of rapeseed straw that returns to the land together with the organic fertiliser. Hein grows his rapeseed in an alternating cycle, once every 3 to 4 years, i.e. on another quarter of his land each year, and in this way he produces enough for his household fuel consumption and for his fodder. As a matter of fact he acts like his grandfather, who reserved part of his land for his horses and cattle that helped him produce his own food and energy. 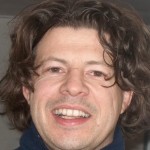 The Abersons now combine growing rapeseed with a new variety of maize seed, ultra-early maize that is harvested by the end of August, followed immediately by sowing the rapeseed; a scheme that allows them double cropping. A second variety of double cropping is sowing rapeseed and clover (for nitrogen capture) in ditches milled in existing meadows. Because of their organic manure production of their own, they hardly need any fertiliser, and nevertheless they produce enough fodder for their 80 cows, and fuel for their tractors and cars adapted to PPO, and combined heat and power production. The Abersons see many more opportunities for valorisation of their rapeseed, like separation of proteins – just like in the case of grass.

Rapeseed oil is more expensive than palm oil, but its CO2 balance of better. When pressed cold, the CO2 reduction is 80% (when pressed hot, the reduction is just 57%). The energy balance, the EROEI (Energy Return on Energy Invested) is very good as well, an input of 112 litres of diesel per hectare gives a yield of 1 600 litres of PPO. That results in an EROEI of 14. That of crude oil is 10, that of tar sand oil a mere 3.

The Netherlands and Germany
In Germany, there is a similarly autarkic approach to rapeseed. The difference being that the German authorities fully engage in the national development of rapeseed as a crop. Farmers in Germany are members of a ‘Maschinenring’; cooperatively, they supply their own food and energy. German authorities and Germen agricultural organisations follow suit by granting subsidies for retrofitting 10 000 tractors for rapeseed use each year. Whereas the Abersons have retrofitted a mere 300 vehicles so far. And Germany now hosts as many as 300 oil mills; importantly enough, Germany does not impose a levy on this ‘green diesel oil’. No European country does so, by the way, except the Netherlands. There apparently, other major concerns, like those of the incumbent diesel suppliers, tip the balance.

Rapeseed and the EU
The EU and the oily crops relate to each other in a strange way, judging by Hein Aberson’s remark on rapeseed oil treated as a first generation biofuel in Europe. Clearly, plant oil from rapeseed, hemp and flax in Northern Europe, with rapeseed as the frontrunner, and from sunflower in Southern Europe, is not a first generation biofuel. These oils are produced as a side product to products like fodder or other (intermediate) biobased products. Fodder, the cake that results from pressing rapeseed, is used to alleviate the major protein shortage in Europe, and for reduction of the much criticised soy imports. One would be tempted to say: good for Europe. Moreover, rapeseed enhances soil quality, and that might be a matter for concern in Europe as well. Rapeseed would seem to be the perfect crop for growing in small farmers’ cooperatives that might have an additional advantage from home produced fuel, and any future valorisation of their product.

In Europe, there is some support for this view: in its 10-07-2013 advice, the European Economic and Social Committee stated that this type of oil production is indeed a side product, the fodder cake with its prospects for further valorisation e.g. by isolation of proteins being the main product. Europe (Commission and Parliament) did not agree to this balanced advice however, which brings us back to the well-known European hassle over biofuel mandates and the difference between first and second generation biofuels. Whereas Europe should be concerned about enhancing farmers’ incomes, through soil improvement, better yield, and better environmental quality. That would seem to fit perfectly with growing such crops in small farmers’ cooperatives as shown, that could attract SMEs taking care of further valorisation.

A clear and interesting story. An issue that should attract more attention from European policy makers. SMEs complain about their limited influence in the Biobased Industries Initiative (BII) that will distribute Horzion2020’s subsidies. Whereas there is a consensus about SMEs being the motors of innovation and of the biobased economy. The combination of a higher farmer’s income and active rural SMEs would seem to be crucial for the development of the biobased economy. Another subject that we will return to soon.