You are here: Home / 2013 / June / Green Deals open doors that would have remained closed

Stimulation of the biobased economy can be done in many ways. Even without subsidies. As a part of its innovation policy, the Dutch government in 2011 called into existence the Green Deals, an ‘intention agreement between government and society without any criteria’. This would seem to imply an understanding of the mechanisms of innovation in order to pave the way for it. By government? Sure. 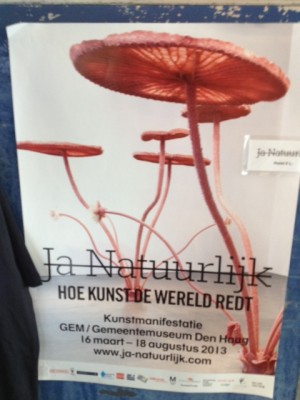 Poster to the exhibition ‘Yes naturally’, subtitled: ‘how art saves the world’

What are Green Deals? The instrument appears to be sensible, surely in an era characterised by a retreat of government in order to leave more room for corporate and social initiative. Green Deals do not involve spending public budgets, at least hardly at the national level. Although they might imply spending by local and regional authorities. By consultation, government tries to understand what drives participants, in order to be able to further their cause.

Struggling with public bodies
Companies came up with a multitude of ideas. More than 150 Green Deals have been concluded now, of which 40% in the area of biobased. Seventeen very diverse projects are under the aegis of the Biobased department of the Ministry of Economic Affairs. One is about a major cooperation between the agricultural, chemical and paper sectors for mapping biomass streams. Government has concluded a Green Deal with the Green Chemistry Campus, the breeding ground for biobased activities in Bergen op Zoom. There is one for the horticultural sector, BB Park Westland – in order to further the biobased involvement in this sector – and government looks for possibilities for ‘green certificates’ with the Dutch national rubber and polymers industry. A special Green Deal is that with HarvestaGG, Jan Cees Vogelaar’s company, which grows tall fescue for biorefinery, in order to produce proteins, liquid biogas (LBG) and turf (compost). The fight of this lonely entrepreneur against a multitude of administrative bodies and many rules might be a case study in its own right. A dogged person like Vogelaar will get there in the end, but a Green Deal does assist him in his struggle with public bodies at all levels. And an interesting Green Deal was concluded with the exhibition ‘Yes, naturally’ in the The Hague Municipal Museum, devoted to our dealings with nature.

More Green Deals are in the making as we write this article, also in relation to other sectors like health care. A biobased Green Deal is being prepared for Pharmafilter, a waste treatment system which grinds all hospital waste, discharges it to a special device in the sewerage and processes it to biogas. Imagine a bed pan made from biodegradable bioplastic (instead of steel), which can be discharged with its contents. In the sewage station organic waste like blood, excrements and waste water are processed to biogas. And Pharmafilter purifies the waste water from traces of medicines. Many health care institutions would very much like to use such a system –but often local regulations stand in their way. Each municipality tends to re-invent the wheel. That can be done better. Does not involve budgets, does involve effort and negotiations.

Elbow-room
Not all green Deals are a success yet. The North Sea Farm (seaweed and algae) is still waiting for action. The working party on national manure regulation – a difficult subject – still has to deliver. The first round runs for three years, then evaluation will take place. No final date has been set for the project yet. Of course, government always asks for results. Already we can conclude that Green Deals inspire, give elbow-room to entrepreneurs, and develop in ‘crossovers’ in particular. In the biobased economy, too.