You are here: Home / 2013 / April / Steve Hartig (POET-DSM): Europe develops the knowledge, the US builds the factories

‘Americans act and deliver, Europeans doubt and talk.’ Says Steve Hartig, General Manager to POET-DSM Advanced Biofuels, the joint venture of the Dutch biotech company and the largest alcohol producer in the US. He is quite outspoken on the construction of second generation alcohol plants in the US. ‘Much of the knowledge is from Europe, but others build the factories.’ And another line of his: ‘Shale gas development  in the US does not slow down the development of cellulosic alcohol, even though this biobased sector will still have to prove itself commercially.’ 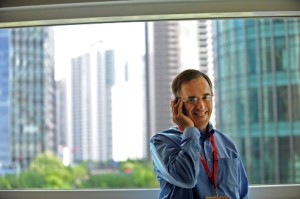 The American term for first generation ethanol is corn ethanol or grain ethanol. Second generation ethanol they call (ligno)cellulosic alcohol. ‘Corn alcohol is nearing its end,’ says Steve, ‘not because the plants are no longer operational or would even going to be decommissioned; but they have reached the limit of what they are allowed to produce in this way in the US; that is why no new plants are under construction any more. A new technology is coming on stream. But the old existing plants keep producing all the same. And they will continue to do so for many years.’

‘In the meantime, three serious players in the US – and one in Europe – are constructing the first facilities for production of cellulosic alcohol, for demand for alcohol keeps growing. Both for energy independence and for a better income to the farmers, and moreover because it is clean. In that order.’ By the way, in Europe the order is just the other way round. We will come back to that. 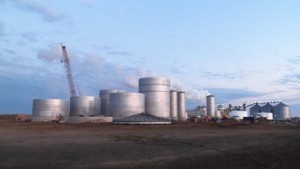 POET site Emmetsburg. During pretreatment, steam is applied to release the lignin

Four players
The industry is still in its infancy – ‘As yet, it is an industry without a commercial product,’ says Steve – and four corporate coalitions try to bridge that phase by investments in commercial plants. We will have to keep in mind that alcohol from biomass is a local business, dependent upon the amount of biomass one can sustainably carry to the factory – i.e. not from too far away. A radius of 30 to 40 miles would be the perimeter. That implies that – just like in the case of first generation corn alcohol – 200 million gallon plants are not practical, whereas 40 million gallon plants are. ‘In Emmetsburg (Iowa), where our 20 million gallon (75 million litres) plant, based on a synergetic combination of POET and DSM technologies, will come on stream in the first quarter of 2014, we deal with 300 to 400 farmers as suppliers of our biomass feedstock.’

On a global scale, POET-DSM will not be the first to enter the market. The construction of the Beta Renewables (a combination of Italian Mossi & Ghisolvi/Chemtex, American TPG and Danish Novozymes) plant in Italy has been finished and the project is now being started up; Spanish Abengoa (which deploys enzymatic technology from Wageningen based Dyadic) will come on stream by the end of this year, then comes the American-Dutch POET-DSM combination, and finally, by the end of 2014, DuPont (which earlier acquired European Danisco and thereby got access to Genencor’s enzyme technology). All these companies process non-edible agricultural feedstock; some use harvest rest streams, others purposely grown grass or reed species. Then there are Kior and ZeaChem in the US who process wood chips, and INEO Bio which is going to operate a plant using yard and vegetation trimmings as a feedstock – all working with different technologies to deliver the same product. Steve holds the view that in the end, some 200 cellulosic alcohol plants will be constructed in the US. 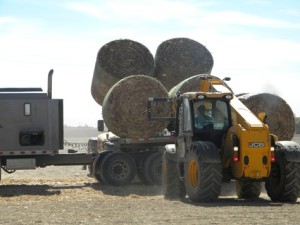 Cillection of side streams on the land. Releasing lignin on the land cannot yet be done.

As for technology, there are two views: some try to apply their technology to process a variety of biomass feedstock like corn stover, wheat straw, tough grass, bagasse and other streams; but POET-DSM sticks to corn side streams (stems, leaves, cobs). Steve Hartig: ‘We presume processes to be so complex that it would be unwise to vary our feedstock. Which would hold true for lignocellulose pre-treatment and delignification as well. And we do not think that in the end there will be just one winner. The amounts in question are so huge that there will be room for several players and several technologies. Which does not stand in the way of our view that DSM and we have the best technology. We invest heavily in this new sector because we believe in it, and that holds true for DSM as well; they invested $ 150 million in this venture, on top of their research costs for development of this process.’

The oil industry and NGOs slow down developments
The fight will be hard, for the fossil oil industry tries hard to keep the share of cellulose and corn alcohol in the US fuel mix as low as possible (check the Science article in the reference). In Europe, on the contrary, the NGOs are the opposing power that strives for a minimal contribution of the new industry, by coming up again and again with new arguments against second generation biofuels. And the wavering European policy seriously puts off industry. The US has set clear policies for the fuel mix (in percentage and in time frame), but Europe keeps changing its views, to the industry’s despair.

‘European quarrels over this new sector,’ says Steve Hartig, ‘cause European knowledge to cross the ocean. US factories are now under construction on the basis of European knowledge, like that of DSM. Brazil and China are on the same trajectory; Russia, India and others will follow, the exception precisely being Europe.’

No innovation
‘The main difference between Europe and the US is that we are much more inclined to take risk – we see opportunities rather than threats. And energy independence is a major policy issue with us. Like farmer’s incomes. In Europe, farmers partly live on subsidies, they appear to be afraid to lose them. The drive for risk taking innovation therefore is much smaller in rural Europe, than on the large corn fields of the Mid West. Our farmers are stimulated to start something new, like collecting their biomass on the land. Cellulosic alcohol production will carry an extra income to the local community. By the way, we only use one quarter of the side streams, in order not to deplete the carbon content of the land. And to put the matter in an American perspective all the way, corn grown here is not fit for human consumption, it is corn silage for animal feed. Processing that corn for ethanol production also produces a side stream of proteins (about 1/3 on weight basis) that is sold as high quality animal feed. History shows that the amount of input available for the American human food chain in fact rose sharply when corn ethanol production expanded. Time to put another perspective to the ‘food versus fuel’ discussion?’ But then he says about corn alcohol, that he looks upon it as a necessary intermediate phase, a ‘stepping stone’, for present developments. ‘Without the learning curve that this phase provided to us, we would not have achieved our present level – anyway not as fast as we did.’ 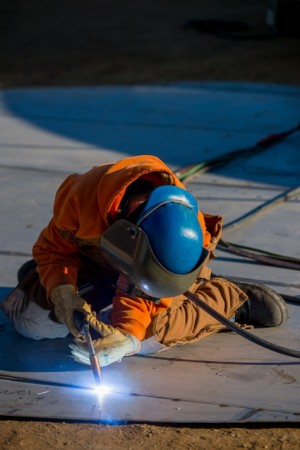 For DSM, the project with POET is one of the most exciting at the moment. Specialties in the field of or on the crossroads of food and health (life sciences) and materials are DSM’s showcases, but a lot of research and a large investment have been devoted to second generation (cellulosic) alcohol.

Conflict and confusion in Europe
The third argument for cellulosic alcohol – after energy independence and farmer’s incomes – is that it is cleaner. In this order of importance. ‘For us, the extra benefit is greenhouse gas emission reduction, but Europe has promoted this to be the main argument.’ Says Steve. In April this year, he attended a meeting in Madrid that all the major European first and second generation players attended. ‘The final message to Brussels was: we are ready for it, but because of a lack of clear European guidelines, the investments in cellulosic alcohol go to the United States.’ And no peanuts, here. According to Steve, European investments in cellulosic alcohol will not take off unless there is much more clarity in European energy guidelines.

Again, Steve Hartig stresses the differences between Europe and the US when he underlines that POET – and other pioneers – were firmly backed up by both the Department of Energy (in the US the driving force behind energy independence) and the Department of Agriculture (driving force behind rural development), and even by the Department of Defense, which acted together in this important matter. In Europe, that is not the case. ‘In Brussels, DG Agri and DG Energy did not lend us an ear. They do not act together, and for the time being do not produce a consistent policy that supports or stimulates investments in cellulosic ethanol.’

Shale gas
And there is the shale gas issue. Generally looked upon in Europe as a game changer. Like in the US. ‘But it does not in the least influence our plans and investments,’ says Steve Hartig. ‘The American administration judges cellulosic alcohol to be a major development, targets have been set for quantities to be produced in the coming years, and corresponding guidelines for the fuel mix. We will have to comply with them. And we can and we will. Meanwhile, we can produce cellulosic alcohol at the cost of corn alcohol, which is less than half a dollar per liter. Shale gas may be cheap, but Gas-to-liquids are not. Sasol is constructing a large GTL plant using shale gas as a feedstock in the US. But we have full trust in our sector. We have no 100% certainty of future developments, but we are on our way, trusting POET and DSM knowledge and technology.’