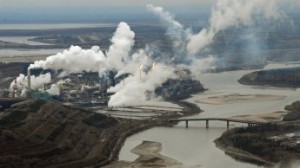 Canada and China are about to sign a trade agreement which would allow China to develop tar sands in Alberta in exchange for enhanced protection of Canadian companies in China. The draft agreement is the subject of a heated debate, not just because of the growth in greenhouse gas emissions, but also because the agreement could effectively overrule Canadian laws. Among them rights granted to indigenous peoples, or state environmental legislation.

Controversial
Tar sand development is rapidly increasing but very controversial. Oil production from tar sands releases up to 20% more greenhouse gases than production of low-sulphurous crude. Moreover the tar sand open pits require much water (35 liters for one liter of oil). Mining activities heavily pollute local environment, both because of the pit itself, and because of releases of sulphurous and nitrous oxides, and volatile organic substances. The policy to expand tar sand mining is supposed to have been the main reason for Canada to retreat from the Kyoto protocol in 2011.

Unconstitutional?
NGOs and lawyers now put forward that the proposed treaty is unconstitutional. On the basis of it, Chinese investors (or arbiters requested by the parties) could, in case of conflict, sue Canadian interests in any country, thereby foregoing Canadian law. In this way, state laws might be circumvented as well. This kind of legal action seems to be increasingly practiced nowadays. Human rights organization Avaaz, which organizes internet petitions, has called for legal action to establish whether the proposed treaty would be unconstitutional.