Encouraged by Dutch top scientist Robbert Dijkgraaf, some internationally reputed scientists got a podium on TV to fantasise on the future, last 16 July. They gave their imagination free rein. For many scientists, it appears to be difficult to stay level-headed in view of the promises of ICT. Particularly the idea that devices might take over or even improve the human brain’s function, unleashes the fantasy. Strictly speaking we then leave the area of science and enter that of human vanity. Scientific fantasy does not equate to scientific insight. 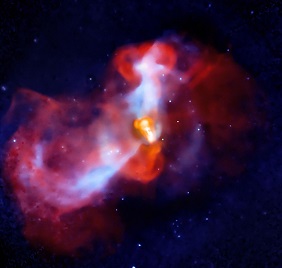 A ‘super volcano’ in the Messier 87 galaxy.

The most runaway scientific fantasy was uttered by Martin Rees, a renowned astronomer, who loosely fantasised on machines more intelligent than humans, that are going to take over the evolution. Evolution as described by Darwin was a slow process (much too slow for someone like Rees), but new ‘post-humans’ will put this to an end. In retrospect, humanity will be just a whisper in between the old natural evolution and the new era, guided by a higher intelligence. The lead might be taken by people who go to Mars and who will have to cope there with most severe, even inhuman conditions. There, freed from earthly ethics, they will develop post-human forms of life, for instance by changes in their own genomes, or by downloading the contents of their brains into machines, by which they can also do away with the burdens of gravity. Modified in such a way, they are excellently positioned to propel the new, technology-driven evolution, of an electronic, not of an organic nature; the optimistic perspective, according to Rees. Within one hundred years, cyborgs will have taken over the reign from humans. No kidding, and Robbert Dijkgraaf just sat there, in Vatican City of all places, where doctor Rees is a member of an advisory committee to the Pope, and he didn’t even look as if he had to hold his laughter.

The computer in the scientific fantasy

Lucky bastards, such storytellers, that they will never be held accountable for their predictions. But they do stand in a tradition. As long as I can remember, computers have dominated visions of the future. At first, they were supposed to take all work out of our hands. Then, in the Limits to Growth report, they could also foretell the future (and that appeared to have other trouble in store for us). They would promote equal opportunities of men and women – oh no, they would not. In the form of robots they would relieve us from all dangerous and dirty jobs, or help us to keep the elderly company, as real people now have become too expensive for such tasks. But their most fascinating aspect always was their intelligence. Was it of another kind than ours? At first, computers could not recognise faces. Then they could not beat the chess world champion. Okay, then the Go world champion, much more difficultly so because Go requires much more intuition, something only a self-learning device can master. Computers took all these hurdles within a few decades. So, it appears, there is some ground for scientific fantasy. 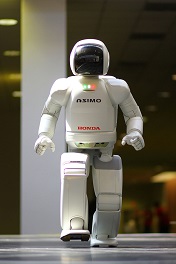 Asimo at a Honda factory. This humanoid robot was created by Honda Motor Co. and was inducted into the Robot Hall of Fame in Pittsburgh in 2004 as the first humanoid droid able to walk dynamically.

Both other scientists in the program, chemist George Whitesides and network expert Jennifer Chayes, were more cautious but did suggest the advent of some phase change in human history, like after the invention of printing. Whitesides perceives a continuity between matter, life and thinking, and speculates that thinking is not the end stage of evolution yet. Chayes’ main theme was human connectivity, much improved in recent times. Both speculated on a collective brain that is in the course of development, a step forward compared to all individual (and transitory) individual brains now.

People overestimate the importance of ICT

It is true: the future escapes the human mind, and even scientific fantasy. We just have to look back some 25 years, when html was developed (an event that marked the major upswing of the internet) in order to realise how fast the world develops. Bill Gates, of all persons, held for some time that the internet was just a transitory phenomenon. We do not now need a crystal ball in order to predict that communication will become ever more important. But the importance attributed to ICT might also stand in the way of the development of a level-headed view. Learning from nature will be the hallmark of the next technological breakthrough, with major consequences for agriculture, food industry, materials use, and medical science. But it does not attract much attention, so far.

And then there is the factor never taken into account by forecasters: the items that will not change. This factor lies embodied in human nature, very flexible and malleable as we often are told, but with its constants. It is not difficult to predict that the future, like the present, will be determined by jealousy, love, greed, self-sacrifice, anger and temper, sympathy, adventurousness and fear, just to name a few. Our future might be more like ours than some proponents of scientific fantasy would make us believe. And it might be much handier to send robots to Mars in order to have a look for things worthwhile that might make life on earth more pleasant. All the more so if robots would have become smarter than humans.