You are here: Home / 2015 / December / Photanol prepares itself for the market

Photanol, based in Amsterdam, has started tests in greenhouses at Bleiswijk (Nl), where cyanobacteria will produce fragrances and flavourings, and intermediates for the chemical industry, with no other feedstock than CO2 and sunlight. Dirk den Ouden, director at Photanol, gives an update. 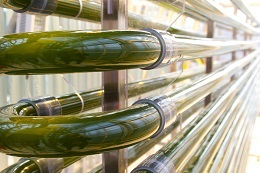 Photanol was founded in 2008 by the University of Amsterdam (UvA) and professors Klaas Hellingwerf and Joost Texeira de Mattos. These concluded on the basis of their research that cyanobacteria are excellent workhorses to convert CO2 to organic compounds through the pathway of photosynthesis. After genetic modification, these bacteria produce compounds like terpenes and organic acids, molecules they do not produce in bulk in their natural habitats. ‘The idea is to construct a production platform on which cyanobacteria can produce a number of substances using sunlight as an input,’ explains Den Ouden. ‘Technology developed favourably some years after Photanol’s start-up. This prompted venture capitalist ICOS Capital to take a share of 45% in the company. Another 45% is owned by UvA Holding, the remaining 10% being owned by the founders. ICOS Capital’s financial injection has speeded up development appreciably.’ For the time being, Photanol concentrates on fragrances and flavourings, because these sell at a good price, amounting up to € 10,000 per kg. Along these lines, the company will not have to invest in major plants and can content itself with relatively small equipment. Production of just a few kilograms may be cost-effective.

Photanol is in the test phase

‘We are about to test production in a greenhouse complex of Wageningen University in Bleiswijk. There, we translate our lab experience on the scale of millilitres and litres to volumes of 500 to 1,000 litres. This will teach us the know-how we need to produce at a larger scale,’ Den Ouden explains. ‘At the start, we will need just a few square metres of space for production, later we will scale up to several hectares, and finally to several square kilometres,’ he adds. The reactors are constructed from translucent PVC tubes, several centimetres in diameter, that are folded and distributed across the area just like piping for floor heating. Sunlight should have easy access to every part of the production process. In central tanks operators supply the broth with CO2 and nutrients, and remove the oxygen that is produced as a side-product. The solution contains some salts and micronutrients, and CO2 as the only feedstock.

‘In Bleiswijk we want to show that production using these bacteria is feasible. Our objectives are to optimise growth conditions, and to separate and purify the products from the reaction mixture. If we succeed in achieving those goals, partners will decide on further scaling up and production,’ says Den Ouden. According to him, there is no simple answer to the question how many grams or kilograms the equipment will produce. That depends to a large extent on location and product. ‘The most important factor is that we circumvent agriculture: we do not go from CO2 to sugar beet to sugar to lactic acid, but straight away from CO2 to lactic acid.’ 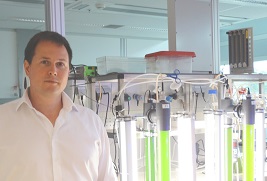 Reactions must take place in a closed system. An open pond does not work. That is because genetically modified cyanobacteria are much more vulnerable than their natural counterparts; in nature they will quickly come off worst. ‘Under normal conditions, cyanobacteria use all their energy to be robust and survive in nature. The modified bacteria use their energy primarily for production, and therefore they are less robust. Moreover, many organisms are very fond of products like lactic acid, and therefore one would like to exclude them from the processing fluid,’ explains Den Ouden. By the way, the risk of contamination increases with the number of pipes. ‘Therefore,’ he adds, ‘we try to design an optimal system with appropriate border conditions.’

He expects Photanol to be able to enter the market within a couple of years with certain flavourings and fragrances. As soon as cyanobacteria and production system have been optimised, production will start. ‘Products with a small market and a high price per kilogram require reactions vessels of just a thousand litres. This boils down to several hundreds of metres of tubing, in an area of a few square metres, that produce one kilogram of product per month. With a system on an area of five football pitches we will be able to produce and market many different products. This again will form the stepping stone for the larger scale production of organic acids, like lactic acid,’ he continues. ‘Then we talk about kilotons per year, for which we would need an appreciably larger area, in the order of a square kilometre. As a special feature to our production system, we do not need a feedstock like sugar. We just require the input of CO2, sunlight and a few salts and micronutrients.’

AkzoNobel supports part of the Photanol research in a public-private research project that is part of the TKI Biobased Economy, a joint top consortium for knowledge and innovation of the Dutch top sectors Chemistry, Energy and Agri&Food. The concern investigates the possible production of a substance, a petrochemical compound so far, by cyanobacteria. Den Ouden expects that the feasibility of this process will be clarified by 2019. At present, AkzoNobel and Photanol do not disclose the nature of the substance in question. Photanol also receives subsidies from the European Fund for Regional Development and in the framework of the research program Direct Ethanol (DEMA) that is part of the European Framework Program 7.

Photanol is not the only company in the world that is active in the field of photosynthesis. In the US, Alganol (using cyanobacteria) and Joule (using a biocatalyst) develop the large-scale production of biofuels, among which ethanol. Alganol uses a system of plastic bags. ‘They have decided to develop bulk chemicals. That requires major steps in the development pathway, and they can pay for them with the large funds from the American government for the development of non-fossil fuels and the ample availability of venture capital. By using translucent plastic bags they try to keep production costs low, as their competitors sell the product at about 50 cents per kilogram. Those bags however are more vulnerable than our PVC pipes, and their handling requires more labour; but we keep a keen eye in this development, for after all, minimal production costs are decisive in industry,’ according to Den Ouden.

Competitors who also produce fragrances and flavourings using microorganisms are Isobionics in the Netherlands and Evolva in Switzerland. Isobionics produces valencene (orange smell and taste) and other products from sugar, using modified bacteria (Rhodobacter) and Evolva produces vanillin from sugar using modified yeasts. ‘If production is restricted to kilograms, sugar costs are irrelevant, but that does not hold true anymore with larger production volumes,’ says Den Ouden. For the time being, Ecolva, Isobionics and Photanol are no direct competitors. The classical production pathway of fragrances and flavourings from orange peel and other vegetal feedstock has run into difficulties, for example because many orange trees in California are affected by the ‘greening disease’, causing insufficient colouring and ripening of the peel. ‘Isobionics, Evolva and we can produce these and similar fragrances and flavourings without extraction and distillation from large amounts of fruit,’ says Den Ouden. Under normal conditions, one kilogram of oranges will produce just a few grams of valencene. Using sugar or – even more sustainably – CO2 as the feedstock, companies can produce valencene and other substances to demand year round. According to him, many industries are quite interested in the development of Photanol. But the decisive factor would be the actual commitment of other companies to assist Photanol to enlarge its production to a commercial scale.