In the tension between sustainability and efficiency something strange is going on: it seems as though the concepts belong to two different worlds, with separate languages. As becomes apparent from reading “The Master and his Emissary”, a 2010 book by Iain McGilchrist (1,2) this might not be so far from the truth. McGilchrist uses the book to discuss the differences between our cerebral hemispheres. Against popular conception he argues that these differences are not negligible and do not lie so much in what they do, but rather in how they pay attention to the environment. Thinking and acting ‘biobased’ might reconcile the two.

Consider a bird, in a field, looking for seeds. On the one hand the little creature needs to find the seeds and differentiate these from the sand grains, or it would quickly fill its stomach with useless muck. This requires focused attention to small parts of its environment, and part by part discrimination for edibility. This is the left hemisphere’s specialty, and the bird appears slightly better at this task using its right eye. At the same time the bird is also food for other animals, and without adequate attention for the rest of its environment it would quickly be eaten. But if this kind of attention were focused, it would be much too slow. Rather, this works with diffuse, unfocused attention. By constantly acquiring a global image of its environment, sudden changes also stand out; for example when a predator moves into its field of vision. This kind of attention is the expertise of the right hemisphere.
We still experience this functional differentiation in our daily lives. When we isolate things from their context and name them we are like the bird looking at the seeds; this we do with the left hemisphere, which is why it does have a strong affinity for the language. An ‘apple’, a ‘computer’ but also a DNA-string or the identification of a functional property are products of the left hemisphere; concepts abstracted from their context. When however we enter a room we are intimately familiar with and someone has moved something, we are aware of the change without immediately identifying what it is. This intuitive sensation is a product of our right hemisphere. In short, our left hemisphere has affinity for isolation and analysis, our right hemisphere for recognising coherence. 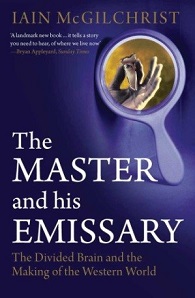 McGilchrist: left hemisphere tends to get the upper hand

They are two ways of paying attention, two ways of thinking with their own neural pathways in our brains. One could see these different ways as different languages, of which one is closely affiliated with explicit language; but the other one eludes verbal expression and is more easily recognised in tone, facial expression: between the lines. And because they have a different way of paying attention to the environment, they will keep on seeing it in different terms: a distinction that reminds one of the debate between environmentalists and industry, or even between the cultural sector and economic discourse in politics.
After a meticulous elaboration of these differences, using among other things examples of patients with lesions in different parts of the brain, the author (who is a psychiatrist in daily life) also attempts a review of the products of the left-brain and right-brain in our society. There it seems that the left hemisphere, with her strong capacity in naming and analysing things, gives us such strong technical and functional advantages that we tend to prefer her methods over the softer values of the right hemisphere, which are by definition difficult to name (let alone measure), and moreover often context-sensitive.

Biobased, the best of two worlds

The book is highly relevant to the themes of sustainability and biobased. Using the information McGilchrist provides in the book it is suddenly not so strange that, surrounding the sustainability movement, Paul Hawken identifies the ‘largest social movement ever’ which refuses to identify itself under a single name (3). It also becomes much easier to understand the increasing social resistance against market-driven reforms (e.g. 4) and economic models which, granted, contain a lot, but are not as comprehensive as they are taken to be for management and public policy. It seems that proponents of sustainability and other social justice movements seem so say, on behalf of the right hemisphere: “gaze at the model for too long, and you miss the bigger (not-yet-incorporated parts of the) picture, with potentially disastrous consequences.
Finally, the theory offers an interesting perspective on the concept of biobased. Biobased tried to find solutions already present in nature rather than limit itself to analytical chemistry and analytical solutions. And for example with the natural processes used for the production of paracetamol, one stays closer to ‘the bigger picture’ or the not-yet-identified context within which the process is ‘developed by nature’. In this manner biobased seems to combine the best of two worlds: the left-hemispheric problem-solving capabilities, together with the sensitivity to context and coherence of the right hemisphere.

Partnering with @Canalys, check out our most recent interview to learn how partners can develop #sustainability strategies and deliver joint sustainability solutions to drive efficiency for the entire ecosystem: spr.ly/60133eRsd Discover More: spr.ly/60153eRs5 pic.twitter.com/S9UBHVRQsX

#Data and #AI could help the world in #sustainability? @Capgemini with interesting answers! my.sociabble.com/QSa7r1nH36wR