You are here: Home / 2014 / September / Brazil too, starts production of second generation bioethanol

Production of second generation bioethanol is taking off. In Italy (Beta Renewables), US (DSM-POET), and now also in Brazil. Here, second generation ethanol factories are an addition to first generation factories. Second generation installations process side streams like bagasse and stems to ethanol. Because of this, ethanol production may rise by 50% without any need to cultivate more land for sugar cane production.

In Brazil, two major companies start producing second generation bioethanol as a motor fuel: Raizen, already a heavyweight in the production of first generation bioethanol, and GranBio, specifically founded for second generation production in 2011. The first GranBio factory has started production in June this year, in São Miguel dos Campos in the state of Alagoas, in North-eastern Brazil. The factory has a capacity of 82 million litres per year, the investment being B$ (reais) 350 million (€ 117 million). Partly, this sum was financed by the Bank of the North-East, partly by the National bank for economic and social development BNDES, in its programs Energy and Chemical industry from sugar. In its fermentation process, the company makes use of a genetically modified yeast, approved in December 2013 by the national technical commission for biological safety, CTNBio. The use of this yeast improves the yield from biomass by 23%. After the start of operations, new investments were announced. Up to 2020 these might amount to B$ 4 billion (€ 1.3 billion). This sum would be required for the construction of ten more units for second generation bioethanol production, that would eventually produce one billion litres per year.

The second unit belongs to the Raizen group, that already operates 24 first generation bioethanol factories. Raizen, a daughter of Shell and Brazilian Cosan, now produces two billion litres of ethanol per year. The company plans to integrate second generation units into 8 of its 24 existing factories. The first unit in Piracicaba (São Paulo), to which BNDES also contributed, cost B$ 230 million (€ 77 million) and will produce 40 million litres of ethanol annually. Because the ‘developed’ countries subsidise second generation bioethanol, half of this amount will be exported, according to the newspaper Estadão. The US for instance subsidises this product with $ 0,65 per gallon (3.8 litres). 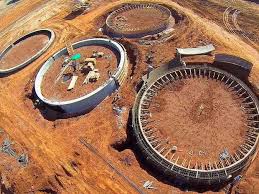 Construction of the Raizen second generation bioethanol plant in Piracicaba.

Both companies use the side streams of first generation bioethanol factories. Side products like cellulose in bagasse and fibres in the stems are processed to sugar as an intermediate product, using enzymes and modified organisms. All figures mentioned should be seen by the way against the background of total fuel demand in Brazil: 136.2 billion litres in 2013, an increase of 5% compared to the preceding year, according to the national fuel office ANP.

GranBio and Raizen both make use of enzymes of the Danish company Novozymes. For the time being, these are being imported. In the longer run, Novozymes will invest in a plant in Brazil at the expense of € 220 million. Other foreign companies are involved as well. GranBio is an accessory to the Italian company of Beta Renewables that proudly underlines that it ‘was the first in the world to construct a factory of second generation bioethanol’. The company has a license to use the enzymatic technology of Proesa. Raizen has an understanding as of 2012 with the Canadian company of Iogen for the construction of a demonstration plant in Ottawa, with the aim to form a joint venture under the name of Iogen Energy.

GranBio moreover collaborates with Rhodia, part of the Solvay group, in the production of n-butanol from biomass. This is an important intermediate product in the production of acrylates and methacrylates, used extensively in the textile sector and in solvents. Together they plan to construct a factory for n-biobutanol in Brazil, first-of-a-kind in the world, starting 2015. According to GranBio, this investment is still dependent on ‘the approval of the Board of both companies’. And on that of the Brazilian commission for the economic defence (Cade), that surveys mergers and acquisitions.