Flax and hemp are making a comeback. Many new products contain these fibres. ‘But the growth does not yet entail large volumes,’ says David Kasse, an agricultural engineer in the Dutch farmers’ association. 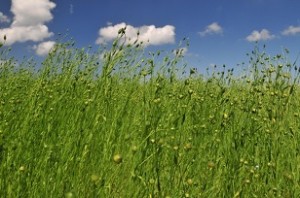 Flax and hemp are as old as human civilisation. Ancient Egypt already had a rich flax culture. Major applications of flax fibres include clothing (linen) and paper. The woody stem parts find their way into construction board or furniture. Properly speaking: we do not mean oil flax, grown for producing linseed. And not the hemp variety grown for cannabis production. We mean the varieties rich in fibres. ‘We could look upon flax and hemp as biobased resources avant la lettre,’ says Kasse. ‘They have been processed for ages for production of their fibres. That can be done in a simple and natural way. First, the stems are broken. Then, they are left to ret. That implies letting bacteria grow under the influence of sun and rain, that release enzymes in the harvested material. These enzymes break down the natural adhesives in the stems, which releases the fibres, that can then easily be separated. Nowadays, retting is done on the land.’

Concentrated in Europe
European flax culture dominates the world market and is concentrated in France, Belgium and the Netherlands. Total acreage amounts to 70 000 to 80 000 hectares. In comparison, another major player, Egypt, has some 15 000 hectares devoted to growing flax. Initially, European flax land was evenly distributed among these three countries. But in southern regions, the growing season starts somewhat earlier. That results in less risk of a lack of sunshine at retting. Therefore, growing flax has gradually moved to France. The Netherlands have just 2 000 hectares left. Among other factors, this is due to the relatively high prices and scarcity of arable land in the Netherlands, where more intensive crops are favoured by farmers. Although in Northern areas, this is compensated by the use of crops with higher yields per hectare. In the Netherlands, three plant breeding companies devote their attention to flax and one to hemp. Another promising development is taking place at the Biorenewables Development Centre in York, where they experiment with hemp varieties that yield a vegetable oil in addition to fibres.

Initially after the Second World War, the future looked grim for flax and hemp. Fossil-based polymers substituted natural fibres in technical applications like cord, nets and mail-bags. However, fashion, household textiles and home decoration remained faithful customers. Kasse: ‘For hemp fibres, paper remained an important outlet. Fibre hemp is grown on 15 000 hectares in the EU, of which 1 000 hectares in the Netherlands. Here, some entrepreneurs took up the old custom some twenty years ago.’ 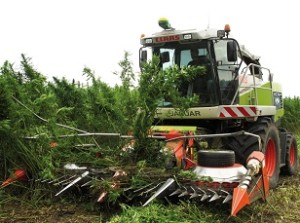 Revival
The last few years show a marked revival. Innovative stakeholders come up with many new applications for flax and hemp fibres. Like in light-weight and energy saving composites used in the automotive industry. Or in bicycle frames, where flax fibres substitute expensive carbon fibres. Even a hip with flax fibre may become possible. Or a bandage that has the optimal moisture balance for covering the wound and keeping bacteria out. Kasse: ‘And flax remains an important textile fibre. Cotton is grown on irrigated (sub)tropical lands, often encountering problems with water supply and salting up. Flax and hemp on the contrary are grown in temperate climates, a major advantage. And the paper and furniture industries keep a keen eye on flax and hemp. There is a Dutch firm, for instance, that produces lightweight tables and stage parts that can be stacked. Another company produces board, sold mainly to Ikea.’

Build upon the old knowledge
Kasse feels there is growing interest for flax and hemp. ‘Researchers and teachers increasingly ask our advice. There are regional initiatives to breathe new life into processing flax and hemp. Like in Twente, once a centre of the textile industry, where they would like to build upon the old knowledge. The Grow 2 Build project led by Wageningen UR in which six countries participate, promotes the use of flax and hemp in construction materials. And at Delft Technical University, NFC Design promotes the substitution of fossil-based or mineral fibres by natural fibres.’

This farmers’ association is the centre of the flax and hemp community in the Netherlands. But it will be discontinued next year. ‘Therefore, we now take the initiative for a sectorial organisation for flax and hemp on a voluntary basis,’ says Kasse. ‘It will also function as a transfer point for entrepreneurs with ideas for growing or processing these crops.’

Incremental growth
In spite of this interest, and the growing number of opportunities and applications, Kasse does not expect the required volumes of flax and hemp to grow radically. ‘They will never become major crops. But that is an advantage, in my opinion. Because there are many opportunities in technologically advanced niche markets, incremental growth would be just fine.’

‘In my opinion, in ten years’ time, annual demand for these fibres in the EU will have increased to 400 000 tons. But if there would be a breakthrough, for instance as an insulating construction material, much greater volumes would be required. Then we would need a larger scale, probably involving other growing and processing techniques.’ Says David Kasse.