You are here: Home / 2013 / September / Coca-Cola blunder: non-information on the plant bottle – latest in a series of incidents

Last month, the Danish ombudsman spoke out against Coca-Cola. His verdict amounted to the assertion that the soft drink bottling company had greenwashed the plant bottle: suggested matters to be greener than they were. The company hardly reacted. The project leader’s statement amounted to the assertion that determining environmental effects is uhh… difficult. The four year old claims on CO2 reduction were more than halved. The company did not look into other sustainability effects, or if it did, it did not publish the results. 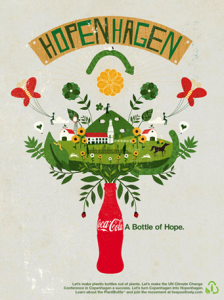 The Hopenhagen poster, published by Coca-Cola at the 2009 climate summit.

Coca-Cola is not just a company, we do not have to explain that. Therefore, the major publicity campaign surrounding the plant bottle at the Copenhagen climate summit, later reiterated at other major events like the London Olympic Games, attracted a lot of attention. But there is a huge discrepancy between these PR efforts and the absence of virtually any foundation of these claims; the absence of an LCA (Life Cycle Assessment) in particular. A discrepancy that motivated the Danish ombudsman Henrik Øe to make his verdict.

In order to prevent simplifications
Coca-Cola cleared matters somewhat only after the verdict. Scott Vitters, the leader of the plant bottle project, granted an interview to Plastics Recycling Update, in which he said that a single LCA is not necessarily the most effective way to judge a product’s environmental standing. ‘An LCA is a very powerful and important tool, but you have to be careful how you use it,’ he said. ‘An LCA has some limitations, particularly when you start looking at the biospace. If you’re interested in biodiversity or land use or social issues, those are not measures traditionally captured by an LCA.’ It is to avoid misrepresentation and oversimplification that Coke has not made its LCA figures more publicly known, Vitters added. Meanwhile, upon further investigation the company reduced its claim that the plant bottle would reduce CO2 emissions, from ‘up to 25%’ to ‘7.5 to 11%’.

Summing up, here we have the largest beverage company in the world, having launched a major sustainability campaign addressed to the larger public, which nevertheless states that this public does not have to know the facts because this could lead to ‘simplifications’. The plant bottle having been launched four years ago, Coca-Cola should have been able to do its maths by now. The company does not only harm itself, but also all companies that make a serious effort to pursue sustainability, and that will no doubt receive a setback from this blunder. 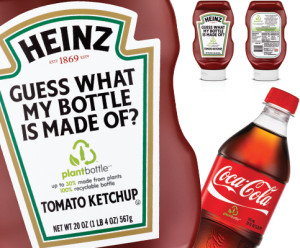 The plant bottle has been embraced by other brands as well.

Not a good track record
The ombudsman’s report contains nine points of criticism on Coca-Cola’s conduct. The criticism includes misleading the company’s customers, keeping secret the results of its investigations, use of incorrect assertions in marketing, and a neglect of earlier demands to stop these offences. According to Kristian Jørgensen, spokesman of the Danish environmental organisation Verdensskove (Forests of the World) that filed the complaint in 2009, this verdict is a major victory in the battle against greenwashing. ‘To put it frankly, the company has sinned against almost all principles when it comes to guidelines for good and fair marketing concerning environmental claims.’

In this field, Coca-Cola does not have a very good track record. Wikipedia gives a good survey of the social and environmental problems surrounding the company. Here we do not discuss the packaging, but the product itself. Foremost are the company’s troubles in India. For more than ten years, local groups protest against groundwater pumping by Coca-Cola, and the company has not succeeded in solving these problems. In some countries, complaints have been made on water pollution and social misconduct, of a serious nature in some instances.

Sustainability score
The biobased economy needs protagonists. Precisely because Coca-Cola is not just a company, its initiative for the plant bottle has meant a lot for the public acceptance of biobased plastics. The same company now puts that achievement at risk by its non-documentation, leading to the Danish ombudsman’s verdict. Sustainability is of the essence to the biobased economy, and companies that adorn themselves with the biobased crown cause damage if they appear not to be aware of that.

Meanwhile, the affair gives food for thought on the sustainability score of biobased plastics. That Coca-Cola did not publish its LCA, testifies to it being disappointing. But even if the CO2 emission reduction should not be more than 7%, this could amount to a large effect in a mass product. Mostly, improvements take place step by step. And of course, there are more reasons for producing biobased plastics than their environmental effect. The mere fact that renewable resources substitute fossil resources, is an achievement. But perhaps we should review more critically the environmental benefits of biobased plastics.