Juiciness, that was the missing element in this week’s synthetic burger. But hopes are high. Within twenty years we will all have the opportunity to buy a burger that did not cost a cow’s life. However, we can do just that right now: the vega burger, for sale in Dutch vegetarian butcher shops, is tasty and juicy, and does not cost € 250 000 but € 2.89 the pair. 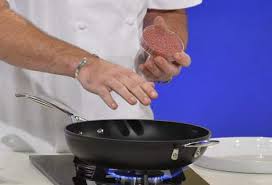 The synthetic burger was presented at a flashy press conference.

The world press missed it, but shortly after the flashy presentation of the synthetic burger, another burger was presented to the press in London, and we know about it because the Dutch press (NRC Handelsblad) reported the event. Whereas the developer of the synthetic burger, University of Maastricht’s Mark Post, expects to need twenty more years, the vega burger developed by Jaap Korteweg (development time less than 2 years) is on the market already. Lupin and soy are among its ingredients, and it has everything that the synthetic burger lacks: fat, juiciness, taste.

Insofar as the hamburger ever attracted me, that emotion has vanished over the years. The hamburger is just one chunk of ground meat, in dire need of vegetables and sauces for its taste. The hamburger’s popularity is the product of habit and price. And the latter turns the vega burger into a good idea: if produced by the millions, it should be able to beat both hamburger and synthetic burger. 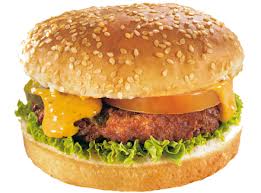 The vega burger can be presented as tasty (or tastetess) as any burger.

Loftier goals
But wisely, Mark Post pursues loftier goals. His aim is to produce a synthetic steak. Rightly so. It appears to be a wise strategy: first placate the Americans with their unavoidable hamburgers, and then disclose the dot at the horizon. The haute cuisine cooking, from an ecological point of view, and entirely climate neutral. We hold technology in high esteem, and foresee that in the end the synthetic steaks might even become tastier than the natural product. And, if the goal is to minimise harm done to animals, synthetic tuna fish meat would be a very good idea too.

But did Mark Post forget about people drinking milk, or wearing leather shoes or bags, in developing synthetic burgers? His estimate of the number of cows we would need for a world-wide production of cells needed for his burgers amounts to fifty thousand. Would mankind have to drink soy milk? Alas, that would completely destroy the haute cuisine.

For the time being, the vega burger lies far ahead, notwithstanding the massive publicity evoked by Google founder Sergey Brin. An old law estimates innovations to take thirty years for the development of their full potential. In the first decade, researchers have to perfect their innovation. Technologists need the second decade to master the new technology. And then it takes another decade for the marketers to position the new product correctly in the market. Mark Post has merely completed the first decade. The vega burger can continue to enlarge its market share for the next twenty years. Now, that’s juicy.