Willem Sederel, manager of the Biobased Delta, situated in the South-western part of the Netherlands, shows no doubt as he indicates the biobased economy as the prime development model for the future green industry. But he also says: ‘We are in the middle of a transition period; in thirty years’ time, we will still use fossil feedstock. In the short term, we should not exaggerate our expectations of the biobased economy.’ 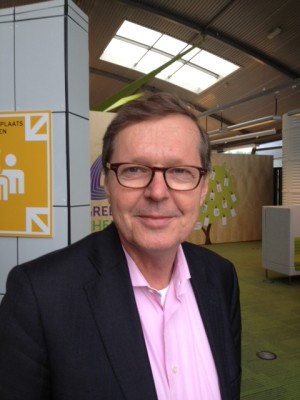 The first commercial factories
Willem Sederel just returned from the BIO World Congress on Industrial Biotechnology and Bioprocessing in Montreal, still coping with his jetlag, when we interview him. There is much activity in the biobased economy in the US and Canada, he reports. The first commercial plants are being built: both Myriant and BioAmber, and Genomatica and BASF, construct full-scale factories for succinic acid and 1,4 butanediol production from renewable feedstock. Cellulosic ethanol now comes to the market, among others from a new plant by POET and DSM. But on the other hand the market reports: other second generation chemicals still have a long way to go.

Europe was very much present in Montreal. The Dutch pavilion, an initiative of BE-Basic, caught the eye. And French IAR (the research centre Les Sohettes in Pomacle near Reims) manifested itself as an established power in biobased development. ‘In the US, the influence of shale gas is clearly visible. There is a lot of ethane and propane coming to the market, which will be processed of course to ethylene and propylene. I expect a lot of start-ups to come to the market that synthesize large molecules from these smaller ones. Nevertheless, we will witness a shortage in C4 chemicals and higher, and in aromatics, substances that cannot easily be produced from shale gas. Prices of isoprene, butadiene and aromatics, for example, are on the rise. Right now therefore, aromatics production from biomass is a good theme for biobased research and industry – whether these substances are produced from sugars, from lignin, or from a combination of the two (lignocellulose). This has become one of the focal points of the Biobased Delta, in a cooperation of the Green Chemistry Campus, Dutch TNO, and Flemish Vito.’

Green naphtha
‘Green naphtha production is another variation to this theme. For instance, we can produce this from pyrolysis oil, which in this case we do not treat it as a fuel but as a chemical feedstock. It needs treatment with hydrogen in order to remove the excess oxygen. With the right pH, pyrolysis oil can be a drop-in in the petrochemical production system. Neste Oil in Rotterdam follows a similar path, starting from waste fats.’

Farms will not become labs
‘I do not expect major changes in our industry’s structure in the short term. Of course I know the visions of pre-treatment of the yield at the farm or at a farmer’s collective. But that will not be an independent industrial activity. In the short term, farmers will restrict themselves to collecting agricultural side streams, and storage of those side streams in a non-perishable form; in particular by removing excess water, for transport of substances containing 75% water is not an economically attractive proposition. The important issue is that the farmer will add value, I do not expect him to move around in a laboratory coat. I do expect the advent of mobile units coming to farms or farmer’s cooperatives to do these pre-treatments. Like the device that Grassa in the Netherlands. In Canada I witnessed mobile pyrolysis units, albeit at farmer’s cooperatives much larger than the average European farm.’

‘The biobased economy is going to succeed, I am convinced of that. Our chemical industries need feedstock security, and agriculture can deliver that. But we will first witness a long period during which petro and bio will coexist.’ Says Willem Sederel.