Even though the biobased economy may incur a smaller scale of operations, there is room for cooperation in larger areas. The Biobased Delta may become a fine example of that. Now merely in the South-western part of the Netherlands, and Flanders. But in due time it may encompass biobased activities from the province of South Holland right into Northern France. 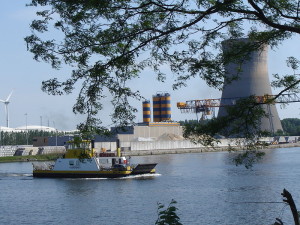 Ferry Willem I in the Ghent-Terneuzen canal

‘Frontier-denying cooperation’, we call the biobased activities in research, education and production in this region. It began as a cooperation of biobased research at Ghent University and the major agricultural and chemical industries in the Canal area (Ghent-Terneuzen), through BioBase Europe, Ghent Energy Valley and Bio Park Terneuzen at the Flemish and Dutch sides of the border respectively. In this part of the delta there are many companies that are somehow interested in the biobased economy. Well-known companies like Dow Chemical, Cargill, Norwegian Yara with Arkema, and Zeeland Refineries (Total/Lukoil) in the Sloe area. Yara and Arkema will build a demo for processing algae and seaweed. The canal area couples side streams like CO2 and heat to the needs of the area’s glasshouse horticulture. Ghent University conducts research on biomass; they will construct a ‘polyvalent’ (multi-purpose) pilot facility suited for many unit operations, both biochemical and chemical. Antwerp develops the ‘Blue Gate’ harbour area for biomass treatment. If we look even further across the French border, we see the biobased area IAR at Les Sohettes, that could very well cooperate with the Biobased Delta Cluster. 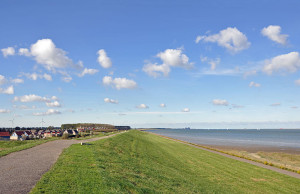 The Western Scheldt region is an important agricultural area.

Biomass will gain in importance
In Bergen op Zoom, Sabic is interested in bioaromatics research. The company took the initiative for the Green Chemistry Campus, and facilitated research by SMEs in its laboratories. Such ‘open innovation’ is unique in the chemical sector. It requires a lot from a company, to facilitate research by others in its labs. But it happened, and by now the development is well under way. Some ten companies have joined the campus for research. Dutch TNO and Flemish VITO cooperate in lignin and C5 (and higher) sugars research. The first development pathway, closely related to petrochemical operations, is to produce ‘green naphtha’ from biomass. The next steps will be production of bioaromatics and higher aliphatic compounds, substances that cannot be easily produced from shale gas and shale oil, and that will carry a relatively high price in the market. Biomass will gain in importance.

Towards a broad regional cooperation
To the North, in Rotterdam, they plan to construct a plant for isobutanol production from biomass. In parts of the province of Southern Holland, horticulturalists will cooperate in particular with their knowledge on higher-value substances from plants. And there is Delft Technical University with its BE-Basic program, to which DSM and innovative SMEs participate. To the North of that, the flower bulb area could easily join us. SMEs can become a part of the action in education and research through the Centre for Biobased Economy (CBBE). Among the partners in CBBE are Wageningen UR, and several Universities of applied sciences like Avans, HAS and InHolland.

The Biobased Delta may witness regional connections among biobased companies and institutes in the Belgian provinces of Eastern and Western Flanders and Antwerp, the Dutch provinces of Zeeland, Northern Brabant and Southern Holland, and Northern France, making for a strong lobby in Brussels. The contacts are there. On major subjects like bioaromatics, cooperation with Northrhine Westfalia is a quite viable option.