In the past few weeks, public discussion on shale gas in the Netherlands attained a new peak. Water utilities and brewers publicly favour a moratorium in view of risks for ground water supplies, and the Union of Chemical Industries asks for compensation because our competiveness would be at stake. In public sessions on shale gas, it sometimes seems as if a shale gas rush would have taken hold of the country. Of course there are risks involved, seems to be the general mood, but we would be mad if we would not go for this opportunity. Prof. Jos Keurentjes (AkzoNobel director for technology and open innovation) and sustainable innovation advisor Martine Verweij (Squarewise) develop an alternative vision, in a dialogue. The present shale gas rush diverts the attention from our short term challenge, and from the required long term transition. 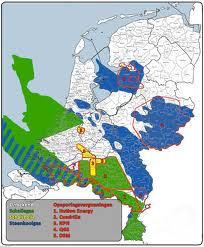 Presumed finds of shale gas (green) and coal gas (blue) in the Netherlands.

Jos asks Martine: Talking to companies with a stake in shale gas recovery, I gather that shale gas mining will not reach an appreciable level in Europe within a decade. Therefore, I came to the conclusion that shale gas recovery will not be beneficial economically in the next few years. Is that your view as well?
Protagonists of shale gas hold that we would rob our own purses if we would not deploy this option. Intuitively, this makes sense, as gas recovery earned us a lot from the sixties onwards. Merely in 2012, state revenues from natural gas amounted to € 14.5 billion (1). That equals € 850 per inhabitant, or 9% of state revenue. A yearly production of 80 billion cubic metres of natural gas earns us this amount – and we will earn another € 200 billion until our present gas fields are exhausted in 15 to 20 years’ time. TNO’s most recent estimates on the shale gas potential amount to 200-500 billion cubic metres, which would earn us an additional state revenue of € 30 to 60 billion. In addition to that, many other stakeholders would gain from shale gas recovery. These are really big numbers, which easily suggest that we could ‘rob our own purses’.

But there are other issues as well. You indicate that according to experts, it will take more than 10 years to recover shale gas in appreciable amounts in the Netherlands. This has a major influence on the magnitude of these numbers. Other European countries, like Poland, have decided to recover shale gas, and this will influence natural gas prices. If the American government would allow more exports (2) and if the cost of liquefying and transporting natural gas would come down, American gas could be imported in Europe at competitive prices. Supply therefore will increase. Moreover, demand is uncertain. Dutch gas-fired power stations lay idle because of low coal prices, which are under the strain of American shale gas.

Moreover, shale gas recovery is much more expensive than natural gas recovery. The Dutch subsoil has a great deal more fault lines than has that in the US, which is a disadvantage and a risk in shale gas recovery. Apart from that, relatively many holes have got to be drilled, which would be a major task in a densely populated country like the Netherlands. By now, 47 communities have declared themselves ‘shale gas free’ (3). The Shale Gas Free foundation – financially supported by two provincial nature protection organisations, Greenpeace and Friends of the Earth, tries to get some more support with meetings and Twitter offensives. As far as we know, no communities have come forward that advertise with the slogan ‘we want shale gas’. In short, it is quite likely that just a small fraction of the shale gas potential in the Netherlands can be actually recovered. If ever it would come to that, because forward recovery costs will be very high, in particular for the first few wells. Will market parties be interested? Shell for instance has indicated not to be interested in the Dutch shale gas market in the coming decades (4). A fine illustration of the vulnerability of the business case for shale gas is the actual movement in the American market. The combination of high recovery costs and excess capacity results in shale gas prices that are lower than production costs, which incur losses with producers (5). They have not drilled any new wells during the past few months, and are not expected to do so in the near future.

Martine asks Jos: Indirectly, shale gas recovery is said to contribute to employment and to investment by heavy, energy intensive industry. But if shale gas production would start only after ten years, do you expect any positive consequences for chemical industry? 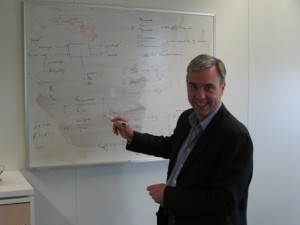 Shale gas recovery in the US has caused a mismatch in competitiveness between (notably) the US and Europe. This applies both to the use of cheap shale gas for energy production, and the use of the higher hydrocarbons content of shale gas as a feedstock for crackers. This reduces the competitiveness of European chemical industries (6), which might have serious consequences if we do not find an answer to this problem, at a short notice. Some industries might disappear entirely from Europe, rendering Europe dependent on imports. In view of the time lines involved, I presume that the solution will have to be of a temporary political nature. I do not expect us to solve the acute problem by tackling really hard shale gas recovery; simply because lead times are much too long.

Martine, reacting to Jos: In short, the shale gas rush which now wanders around is caused primarily because low energy costs in the US undermine our competitiveness at the short term, and because we associate shale gas with retaining our public income, in view of the depletion of our main gas field. Moreover, I feel that this rush propagates itself freely because there is no alternative attractive long term view on a new and responsible economic model. Do you agree, and if so, what would be the ingredients of this new model, in your opinion?

Jos, reacting to Martine: I see opportunities in solar cell technology and industrial biomass use to beat shale gas. Solar cell prices fall so quickly, that we expect them to be lower than our present retail price within a few years. I do expect solar cells to produce electricity mainly on the level of households, offices, districts, and SMEs, and not in major power stations. This multi-local approach will entail many new opportunities. Biomass of the second (and perhaps third) generation may become an important feedstock for chemical industry. Therefore, I would prefer to make a plea for deployment of these sustainable technologies. This will enable us to ‘deal shale gas a blow’ in ten year’s time, which would be beneficial to Europe’s industrial competitiveness.

Martine, reacting to Jos: I fully agree. Recently, I read that Avantium, the young innovative player, makes the same plea (7). Investigating the shale gas option would costs us a lot of money now, and will contribute nor to the sort, nor to the long term. Worldwide, some countries are frontrunners in investments in cleantech, sustainable energy and the transition to a biobased economy and beyond to a circular economy. Countries like Germany, Denmark and even China. These countries reap the harvest of a cleantech industry growing 30% per year. In 2010 aleready, it had an annual turnover of € 250 billion (8) and Denmark earned a nice € 12 billion in 2012, in the export of cleantech services and products (9). McKinsey recently mapped the possible benefits of a transition to a circular economy, and was surprised by the enormous potential (10). Of course, we do not get there just like that. But we would be much smarter if we would devote the money, now spent on shale gas research and test drilling – some € 20 million per drilling – to the development of a strong and broadly supported vision ‘beyond shale gas’, and to policies that would reinforce our competitiveness at the short term, and promote this vision.

Notes
1. Sources: Dutch Bureau of Statistics (CBS), Ministry of Economic Affairs
2. http://www.reuters.com/article/2013/05/17/usa-lng-freeport-idUSL2N0DY1C620130517
3. Source: Groene Amsterdammer, 13-6-2013, wel of geen schaliegas ‘Neeknikkers’ (in Dutch)
4. Source: Telegraaf http://www.telegraaf.nl/dft/beleggingsfondsen/beleggingsfondsen_grondstoffen/21404341/__Shell_ziet_schaliegas_uit_Nederland_niet_zitten__.html (in Dutch)
5. Closing down wells that make losses is not an option, a.o. because of the legal provision that the well should be depleted within five years.
6. Also see the report by Cefic; http://www.cefic.org/Documents/PolicyCentre/PositionPapers/Cefic-Position-on-The-Implications-of-the-Shale-Gas-Revolution.pdf
7. http://fd.nl/ondernemen/430889-1306/schaliegas-in-de-vs-biedt-europa-een-waanzinnige-kans-de-achterstand-in-duurzame-chemie-in-te-halen?visited=true (in Dutch)
8. http://fs-unep-centre.org/sites/default/files/publications/globaltrendsreport2012.pdf
9. http://www.investindk.com/Clusters/Cleantech
10. http://www.ellenmacarthurfoundation.org/business/reports/ce2013