You are here: Home / 2013 / March / Solve the financial crisis, be straightforward

Five years after the Lehman Brothers bankruptcy, nothing has been done yet on the set of measures which were thought to be essential at the time; measures which boil down to reinstalling the protection of financial markets, installed after the major 1929 crash. Politicians do nothing about complex financial products, the virtual economy grows at the expense of people who create real value.

It is sad, as so many people are engaged in activities for a new world on the basis of a circular economy, to find many counterproductive people in finance and politics. Of course, biobased companies aim for earning money in the new economy as well, but they add real value and therefore contribute to social welfare.

Our world is riddled with financial crises originating from the virtual economy, which nevertheless hit hard the real economy. Politicians do not dare to be straightforward; again and again, they take incomplete measures which already announce the next crisis to come.

Incomplete analyses, incomplete measures
The latest crisis is about Cyprus. The European finance ministers judged this to be the right time to depart from their self-imposed protection of people with savings less than € 100.000. Chairman Jeroen Dijsselbloem defended this proposal, saying: ‘People with large savings divided them up in portions of € 100.000 or less. If we do not impose a levy on people having small savings, they will escape a just verdict.’ In other words, the real problem (not mentioned by Dijsselbloem) is the abuse of banking secrecy by the big investors, who have taken good notice of the policy to protect people with small savings, and who think they can escape taxation in this way. Therefore: lift banking secrecy in Cyprus, at least sufficiently for counteracting this abuse.

Incomplete analyses lead to incomplete policy measures. Tax authorities in Greece are supposed to get their act together – after banks and governments having allowed the extraordinarily rich Greek elite to store its money abroad safely. No tax ethics in Greece, I guess, without proper treatment of this problem. 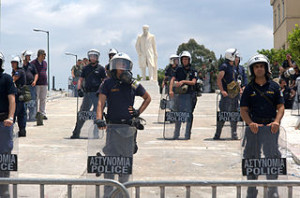 Tax havens
Propose solutions for Cyprus without stipulating that the tax haven should cease to exist. Meaning that the problem will pop up again, possibly somewhere else. But tax havens are not to be called by that name. Declaring in earnest that the Netherlands is not a tax haven for corporations, the Dutch state secretary for finance did so recently without blinking his eyes. Is it true, as people have said for many years, that Shell does not pay corporate tax in the Netherlands?

Calling control to be tough. Control is simple, if one takes the right policy measures. Predators have descended upon our banks, calling themselves merchant banks, which inflate real money to trillions. Cut loose that connection. Separate traditional banks and merchant banks. Prohibit complex financial products, impose the obligation for each derivative (essentially an insurance product) to have a real (not financial) security – instead of taxing financial transactions. Disentangle banks and insurance companies. Save us from the terror of the ‘financial markets’.

Stop beating around the bush
It is that simple. Stop beating around the bush. Financial analysts and politicians, stop lending an ear to powers which each want to keep intact part of this system gone wild. Start making the correct analysis. That is absolutely required as a starting point for the weary business of national and international negotiations that will follow.

And why do politicians lend an ear to vested interests? We understand that Obama cannot turn his back on Wall Street, which houses his campaign’s most valuable donators. We take it for granted that Cameron is held hostage by the City. But other European politicians? Are they held back by the fear to lose powerful friends? Do they fear for their careers? Are they afraid to take ‘extremist’ views? Politicians, if you do not have the guts to make correct analyses, do accept your voter’s indignation and scorn at the next elections. In Greece and Italy, voters have made a resounding start in that process.