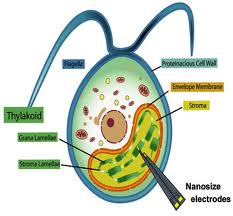 Energy throughput in the biosphere is very small, actually. Biomass production from incident light is relatively inefficient, also in Russian wood or Sargasso seaweed. The earth receives an amount of solar irradiation equal to 160.000 TW; less than 100 TW of that is used to produce biomass. Global human energy use is 16 TW, probably increasing to 30 TW in 20 years. In other words, solar irradiation is amply enough to supply us with energy, but if we should only rely on the pathway through biomass, we would run into constraints very quickly, and it would even be doubtful if we could reduce CO2 emissions appreciably. And we need biomass for food.

Fuel from biosolar cells
The incidence of solar irradiation in North-western Europe is 1.000 kWh/m2/yr. At 20 ct/kWh the maximum value of this amounts to € 200/m2/yr. Which raises the question: how can we profitably use this irradiation? By now we can build houses which are energy neutral; but we can only make a profit from this on a large scale if we can efficiently store energy so as to reconcile supply and demand. Solar cells on our roofs produce electricity, which is hard to store. Biosolar cells allow us to store energy in the form of a fuel. Such cells produce electricity as long as they can supply it to the house or to the grid; but if there is no demand for electricity and the sun shines nevertheless, the cells produce a fuel or a feedstock for the chemical industry. Therefore, everyone will become a part time fuel producer. We all become ‘hobby farmers’.

Biosolar cells can reduce CO2 emissions, because all energy originates from the sun. But they need a lot of surface. A present day rather inefficient car would require a 25 m2 solar panel. That fits on the house’s roof, or the car owner might lease some land somewhere. McKays booklet ‘Sustainable energy without the hot air’ contains many formulae which facilitate these calculations, needed to have a proper view on dimensions.

Use underground resources
Sometimes we need energy in a concentrated form, for large scale use, like in an airplane or in the harbour. How will we produce such amounts of energy in a sustainable economy? Aviation has a small share in world energy use, but it needs a special fuel, and in Western countries on the contrary aviation’s share is quite large. We could solve this problem using genetically programmed algae and biosolar cells for kerosene production on very large surfaces. The best strategy would be not to have the amount of light but the supply of CO2 as the limiting factor – this would allow for a better use of the surface. By using algae which share their existence with us: we supply them with food, CO2, and energy in the form of light, waste heat or even electricity, and they supply us with fuels and other useful products. Need be, we grow them in cavities in conjunction with CO2 storage. Probably we will have to harvest energy on a large scale underground anyway. Geothermal heat is in ample supply literally everywhere, and we now have the required knowledge to drill holes and pump steam through the earth at great depths. Like biosolar cells, geothermal heat allows us to compensate the irregular supply of solar and wind energy.

Close loops locally
In a sustainable economy, let us try to close locally as many loops as possible – that would entail minimal energy losses. In the Netherlands, we would require 1-3% of the land to be covered with biosolar cells at 100% efficiency. Compare to this: roads cover ca. 1% of the land, houses and buildings ca. 10%. A significant part of this could become multi-purpose and contribute to the basis of our existence. I write this in a valley in the Pyrenees, which has produced its own energy for over 50 years, where nature is in much better shape than a century ago, and the population more wealthy.

Good technology will therefore be a prerequisite. We will need an ambitious development program in order to attain that goal. Rotterdam is the Silicon Valley of fuel, and we are talking about the fastest growing market in the decades to some. Time is of the essence, others press ahead as well.

Farming vs. economies of scale
New technology allows us to close loops better. We have now mastered the art of recycling organic substances at the scale of a large building. But economies of scale do not apply to loop closing. We will have to strike a balance between farming and economies of scale. We will have to decide which processes of waste management we could best perform in small closed loops, using the workforce of the individual, and which on a large scale, using teamwork. We must keep in mind that in many instances we have not yet mastered the small scale farming component, which would seem to lead to economic loss in such a process. In the future, what will we perform as hobby farmers? And what as large companies?