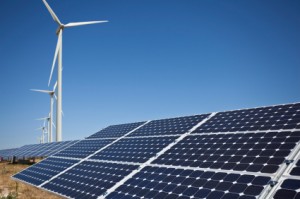 Energy systems will revolutionise even more radically than industry. The price of solar cells has taken a dive. They are modular in makeup, i.e. they can be applied both on a small and a large scale. Everyone can mount them on their roofs, in principle for the same unit price as the utility which would order them by the hectares.

Everyone will become both consumer and producer
If electricity would be mainly locally produced (solar cells or micro-CHP), this would require quite another grid design: bottom-up instead of top-down. In principle every electricity consumer might become an electricity producer; for this, futurologist Alvin Toffler coined the term ‘prosumer’ long ago. Production and consumption of electricity will have to be balanced at the prosumer level in order to use or supply electricity only when necessary. This optimization is called ‘power matching’. In the household, the fridge may stay turned off for a while if the momentary electricity price is high, or the washing machine might wait a while to heat the laundry; on the other hand, the apple pie might be baked somewhat earlier if the remuneration for electricity supply would be low. Experience tells us that information about energy use often influences behaviour a great deal: people tend to consider it a game, to use as much as possible the own energy supply, and buy as little as possible. Automatic settings reinforce this tendency.

For consumers, the driving force behind this process is cost minimization; but in doing so, they also minimize grid costs, as less electricity will be transported across the grid, which therefore can be lighter in design. At the same time, such a system is more sustainable, as there will be less system losses. And security is enhanced, as major blackouts will become virtually impossible. This process will have to be reiterated at each level above that of the household: the street, the quarter, the town, etc. Which will finally produce a system completely different from a system in which electricity can only move in one direction: from power station to customer. In short, the grid should be redesigned. We need to invest in order to reap the benefits of a decentralized energy supply.

The smart box
At the heart of the new grid is an energy management system (a smart box), mounted with every customer. The smart box regulates electricity use, in such a way that electricity is preferably sold to the grid when remuneration is high, and preferably bought when the price is low. The smart box reacts strategically to an electricity ‘spot price’. Smart boxes are mounted in households, and in streets, quarters, towns, etc., again and again on a higher level.

Other sustainable energy sources share the tendency towards a small scale, fitting them nicely into a decentralized energy system. Biogas production requires transport of the low-value resources over short distances in order to be economic. Wind power is rather large-scale at present, but might migrate towards a smaller scale using new technologies. Artificial photosynthesis also carries promises for a future decentralized energy (and materials) supply, on the basis of its potentially high productivity.

Buffers are required
Balance is of prime importance to energy systems, in particular to the electricity grid, where in principle demand and supply have to be simultaneous. As solar and wind power will acquire an increasing share in electricity supply, balancing the grid will be more problematic because supply will depend on atmospheric conditions. One way in which balance may be maintained is the creation of buffer supplies of (sustainable) fuels, like biobased gas or sustainably produced hydrogen, which can be used for electricity production when required. Other proven methods of electricity storage make use of storage reservoirs (hydropower), pump energy (e.g. in deep shafts), fly wheels, and magnets.

Another principle, which could promise much more capacity, is to use electric motor vehicle’s batteries as a buffer. Suppose the majority of cars would be electrically powered (by batteries or reversible fuel cells), and these would be connected to the grid when idle; then they might store a temporary excess of (decentralized) electricity production, and supply a temporary shortage from the energy embedded in them. That would produce a stable and sustainable energy system, which for its realization remains dependent on the price of fuels and storage systems.

A new development model
A small-scale energy supply and a decentralized industry would form a firm basis for a decentralization of the economy, and an enhanced self-sufficiency of regions. Technologies making breakthroughs in the coming decades will allow us to produce high-quality materials on the basis of regional feedstock, and also generate the energy required for their production. This is a development diametrically opposed to that of the last centuries, in which raw materials were increasingly imported from abroad, as a result of which the volume of world trade became a measure for prosperity.

It is hard to imagine a world which is both highly technological and decentralized. As far as energy is concerned: with some effort many parts of Europe might reach energy self-sufficiency. Materials could be produced to a large extent from biobased feedstock, grown locally. An entirely new development could be set in motion by artificial photosynthesis. We could separate water into hydrogen and oxygen using this technology, and subsequently produce any organic molecule from hydrogen and carbon dioxide (i.e. both chemicals and fuels); and all this at a much higher efficiency than nature in natural photosynthesis. If this pathway should take off (primarily a cost problem), then we could produce almost anything anywhere.

Each region might be different
Within Europe, major regional differences might occur. For instance, Scandinavia will continue to make use of the sheer volume of its wood production, and its low population density. Swedes, Norwegians and Fins might continue to build wooden homes, and drive on second generation biofuels. Southern European countries might produce biobased plastics from artificial photosynthesis, and drive electric vehicles powered by the sun. Countries with much wind, like Spain and Denmark, will not turn their backs on wind power. In the Northern parts of the Netherlands and Germany, an economy might evolve on the basis of sugar beet production. Even densely populated areas might become energy self-sufficient, if as a rule domestic and industrial rooftops would be clad with solar panels. Each region might choose its own focal points.

Regional economies will share one common trait: their high knowledge intensity. Economic decentralization while retaining wealth, can only be done if people have first-class scientific and technological knowledge at hand. Present developments justify this picture of the future. In such a future, regions will not share their prosperity by volumes of trade, but of knowledge.

This article consists of the following paragraphs:
Does the future look grim?
Trend 1. Women will take the lead
Trend 2. Organisations will be founded on trust
Trend 3. New social networks are on the rise
Trend 4. Sustainability as a common goal
Trend 5. Decentralisation of industry in a biobased society
Trend 6. Small-scale energy systems
Trend 7. Europe was, is and will remain one of the most important producers of scientific knowledge in the world
Conclusion: think global, act local