You are here: Home / 2016 / June / Biobased chemicals will develop beyond the obvious

To me, the speech of Dr Laura Ruohonen of Finnish research centre VTT at the World Bio Markets Conference, last March in Amsterdam, opened new perspectives on the biobased economy. There are many, so far unexplored biobased chemicals and polymers – we are just beginning to see what the future might have in stock. At least, that was my conclusion after hearing her speech.

Of course, Dr Ruohonen sang the praise to the excellent services that VTT can offer to biobased companies. VTT has ‘a strong interface with customers and a long tradition in working with industry’, and can perform ‘R&D targeted to respond to business and market needs, and develop strategic IPR.’ In their Bioruukki piloting centre, they have 70 bioreactors at their disposal, in the range of 0.5 to 1200 litres. They have a broad range of expertise: renewable energy solutions, innovative biomass processing, recycling concepts and new routes to biobased chemicals. There are other centres that render these services. But the striking part of her speech was in her examples. 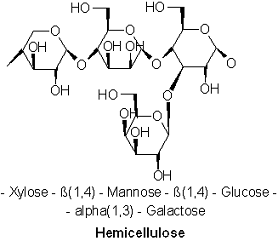 Hemicellulose is one of the most elusive biobased materials. Images of it are restricted to its chemical formula.

Very promising to me seemed the development of new products from D-xylose. This sugar is the main constituent of hemicellulose, one of the components of wood. As more wood is now used to produce biobased chemicals (e.g. ethanol from cellulose), an increasing amount of xylose now comes to the market. This too can be processed to bioethanol (although this is not as straightforward as ethanol production from cellulose) – but we might do much more sensible things with it. Like processing it to xylitol, the sweetener. Or to D-xylonic acid. This compound has many uses: it can be used as a complexing agent and chelator; as a precursor to 1,2,4-butanetriol and glycol; in the production of co-polyamides, polyesters and hydrogels; and as a clarifier for polyolefins. VTT researches conversion of D-xylonic acid into platform chemicals.

I appreciate the importance of finding better uses for C5-sugars than processing them to ethanol. D-xylonic acid is an interesting intermediate. But I can imagine that any further processing needs to be done together with industry, in order to establish the most promising pathways. How do you do this? ‘In the field of C5 chemicals,’ professor Ali Harlin replied, ‘there are typically many opportunities due to the fact that they are not abundant in a typical cracker production. Also some minor products from cracker streams are interesting. One example that could be named is butadiene from xylonic acid. However we are somewhat reluctant to go into details at this phase because of industrial interest on the topic.’ 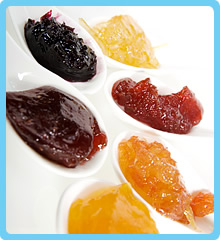 Pectin is much used as a gelating agent but it can also have applications as a feedstock for biobased chemicals.

Another promising field lies in the development of products from pectin. This is a polysaccharide present in fruits and in crops like sugar beet (also see our interview with Cosun’s Ad de Laat). VTT estimates annual world production from sugar beet to be ca. 250 million tons, from citrus fruits 115 million tons. ‘Pectin as such has its traditional applications and is of course a possible substance also for novel adhesives, glues,’ says professor Harlin by mail. ‘However, we are mainly interested in its galacturonic acid, which is subject to produce galactaric acid, trivially called mucic acid (biotech conversion VTT IPR). Mucic acid can be used to replace tartaric acid in self-rising flour or fizzies. It has been used as a precursor of adipic acid en route to nylon by a rhenium-catalyzed deoxydehydration reaction. However we have found an attractive route to FDCA: biochemical selective conversion with an easy to separate galactaric acid, and its catalytic conversion to FDCA, where VTT has IPR and results are promising, markedly attractive conversion and especially selectivity. Alternatively, VTT also has proprietary technology from same origin to produce muconic acid for consumer bioplastics including nylon-6,6, polyurethane, and polyethylene terephthalate (PET).’

And finally VTT proposes polyglycolic acid. This is a biodegradable polymer, traditionally used for surgical sutures that are resorbed in the body. However, by modification and combination with other materials, it now finds new applications in packaging materials, because of its mechanical strength. In short, the discovery of new pathways to produce new biobased chemicals and products has just begun.